The space edition of the 14th ŻUBROFFKA festival!

For thousands of years, the sight of stars scattered in the black sky has amazed people and at the same time caused them fear… It stimulates the imagination, raises questions and makes you look for metaphysical power that created such captivating and mysterious beauty.

People from the beginning of their history wanted to somehow understand and organize the glowing points over their heads. Dreamers and visionaries saw among them mythical creatures, animals, characters, objects…

Space and its secrets are the theme of this year’s ŻUBROFFKA. On the one hand, space seems to be a possible escape route from the increasing threats on Earth, and on the other – it can become a chance to release new potential. A trip to space also allows you to see the world from a completely different perspective.

Festival’s Bison (by the Kijek/Adamski duo), deconstructed at the previous ŻUBROFFKA, returns – thanks to the imagination of Michał Socha – in a new, cosmic-astral setting!
Izabela Sroka, a graphic designer working with us, created this year’s visual identity for the festival basing on the designs created by Michał Socha. So, when the 14th edition of the ŻUBROFFKA International Short Film Festival takes place from December 4 to 8, a new constellation will flash in the sky – Bison Major! 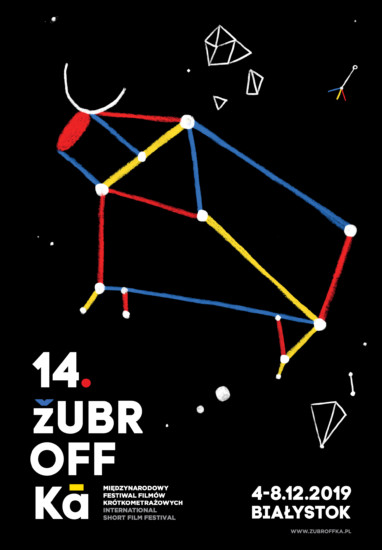